Photo by ThisIsEngineering via Pexels

According to Egypt’s National Strategy for Women Empowerment 2030, raising the female labor force participation rate to the male level, coupled with access to employment opportunities, would increase GDP by approximately 34 percent. Egypt ranks 134 out of 153 countries worldwide on the Global Gender Gap Report issued by World Economic Forum in 2020. The index is composed of four components: economic participation and opportunities, health and survival, education attainment, and political empowerment. With women participation in the Egyptian labor market hovering below 25 percent and the unemployment rate of women being high compared to that of men; it is evident that this component of the index is significantly weighing down the country’s efforts toward achieving gender parity.

COVID-19 has resulted in what has been labelled by some world leaders as a ‘SHE recession’ compounding an already adverse situation for women around the globe even in countries that were ahead of the curve. The care burden for the young and elderly -a responsibility typically shouldered by women- grows immensely with the closure of nurseries, schools and other facilities due to the pandemic. Pre-COVID, the labor force in Egypt stood at 29 million people strong (23.7 million males versus 5.3 million females) in March 2020. As per D code for Economic and Financial Consulting’s Egypt Employment Profile in September 2020, the labor force witnessed a decline where 2.3 million individuals opted out during the quarter from April to June 2020. Of these 1.3 million are females and 1 million are males. In the same quarter female unemployment was registered at 16.2 percent compared to male unemployment at 8.5 percent.

With the advancement in vaccine production and its roll-out across the globe, a lot of the discussion is focusing on the need to build back better. More attention is being given to the need to address climate change. This emphasis needs to be backed by a workforce properly educated and trained in Science, Technology, Engineering and Math (STEM) skills. This is an area in which females do not typically enroll at the global level. More so at the national level, STEM attainment in Egypt stood at 7.3 percent for females as opposed to 15.3 percent for males. The UNESCO Global Education Monitoring Report for 2020 indicated that global participation in tertiary education reached 224 million in 2018 equivalent to a gross enrolment ratio of 38 percent. Disadvantaged young people face multiple obstacles to gain access to tertiary education especially students with disabilities and those coming from poor and rural areas. In fact, it also cautions against rising student precarity as the number of marginalized students in tertiary education grows.

The USAID Scholars Activity (a USD 36 million project) implemented by the American University in Cairo (AUC) was launched in March 2020 addressing the aforementioned challenges through targeting 700 students over five gender balanced cohorts. These young Egyptian men and women come from all 27 governorates of Egypt demonstrating financial need, exhibiting leadership potential and achieving academic merit (over 85 percent) in the Egyptian high school certification Thanawiya Amma. The program offers the scholars full academic scholarships in fee-based credit hour programs administered in the English language at seven partner universities: Cairo University; Alexandria University; Ain Shams University, Assiut University; Mansoura University; Zewail City for Science, Technology and Innovation; and the AUC. As per Egypt’s Vision 2030 priorities, the scholars study in majors focusing on Agriculture, Energy and Water. The scholarship also covers housing, a stipend, medical coverage, and a laptop. In addition to the academic program the scholarship includes skills enhancement in the areas of student wellbeing, English language, leadership, job placement and networking, entrepreneurship; as well as facilitating internships and an opportunity of a summer or a semester in the United States.

Through the USAID Scholars Activity, we are catalyzing change to empower young Egyptian women to enter the labor market in STEM fields after studying in highly ranked public and private academic institutions. Catering to the need of building back better, the scholars are conferred undergraduate degrees in energy engineering, computer science and agriculture. Internships, job placement and networking will enable them to transition into employment upon graduation. Further, they are very well-placed to be change agents, entrepreneurs and future leaders to realize Egypt’s Vision 2030. 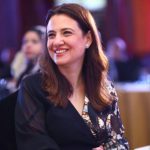 Amal Mowafy (Class 93’ & 98’) is the Chief of Party of USAID Scholars Activity implemented by the American University in Cairo.